My daughter has always been fearless in the water. Up until last summer she would enthusiastically shout, “watch me dive” before throwing herself into the pool. I would watch her sink to the bottom for an obligatory thirty seconds, before fishing her triumphant, squirming body out from the shallow depths. Every now and then there would be a fellow momma that would be wading by, chasing after her own mermaid or merman, who would stop just long enough to let me know that my daughter was drowning. Never mind the fact that I was standing over her, arms outstretched, laser eyes focused on my child. I would disguise my annoyance with a laugh and swear to myself that I would never be that woman. I would never assume that I knew better or usurp another momma’s autonomy. But who am I kidding? There are many moments when I become that woman.

They started out playing well together, each taking two rings. Then our new friend decided that he would rather grab the rings that my daughter had just retrieved, than dive for his own. I could tell she was confused when he latched on to the rings in her hand and began tugging at them. Hard. I was sitting in the water a few yards away and started to get up. Then my brain started screaming, “Whoa helicopter mom, sit your butt back down!” So I did. I sat on edge, watching various emotions play across my daughter’s face, and I felt my stomach twist in knots at the life lessons she was potentially learning.

Here was a boy, aggressively tugging my daughter back and forth, attempting to pry her toys from her hands. He was ignoring her words, words that I have taught her to use when people invade her space. I saw her face, her smile that didn’t reach her eyes as it normally does, trying to figure out if this was play or if this was mean. It was only a few seconds, but it felt like a lifetime. A lifetime in which I recalled moments from my childhood of being thrown onto the ground at recess by boys that “liked” me, or so my teacher said. Moments when I was too naïve or too sheltered to realize that a boy who I out “wrestled” was angry, not just because I had won the “game,” but because I didn’t succumb and allow myself to be kissed, as my more experienced friend had. Times when being tossed and dunked in the pool by a boy meant that he wanted to be my boyfriend.

I knew what was coming next and I sprung up. Sure enough, just as I started to move towards them, he reached out and shoved her head under water. Before I realized it, my teacher’s voice was bellowing at him for all to hear, as I crashed through the water. I didn’t care. Grandma was laying out on the other side of the pool, but to her credit she jumped in at the sound of my voice. By the time she reached my side, I had finished lecturing her grandson about shoving people under water and how he needed to ask nicely for toys that he wanted to play with. As she began to rip into him, I turned to my daughter and told her that she should still share with him. At first she protested, but then she handed him two rings and he apologized. I then played pool police for the next thirty minutes, tossing rings for each of them to dive for.

The truth is, he was a sweet kid, and only his parents know whether or not he knew any better. I want my daughter to know better though. I don’t want her to equate hurt with affection.  I knew she was watching me as I chastised this stranger’s child, and I realized that as much as I wanted to whisk her to the other side of the pool, I couldn’t. She won’t always be able to run away from the boy who shoves her on the playground. I have to teach her to stand her ground and set boundaries, without losing the kindness that radiates from her core. So I made an effort in front of my daughter, to play with this kid as long as he followed my boundaries. When he chucked the rings back at my face, I told him he had to hand them to me if he wanted to play, which he did. The afternoon ended peacefully, and we all amicably said goodbye when it was time to go.

I don’t know if they way I reacted was right or wrong. I just pray that as my daughter encounters similar situations, that the sweet kindness of her spirit will not only be unharmed, but that she will also become unafraid to fiercely protect her boundaries.

We made veggie pot pies for dinner and a bell pepper salad with some unique farm-to-table produce that a sweet friend shared with us. Comfort food for a normal, slightly odd kind of summer day. 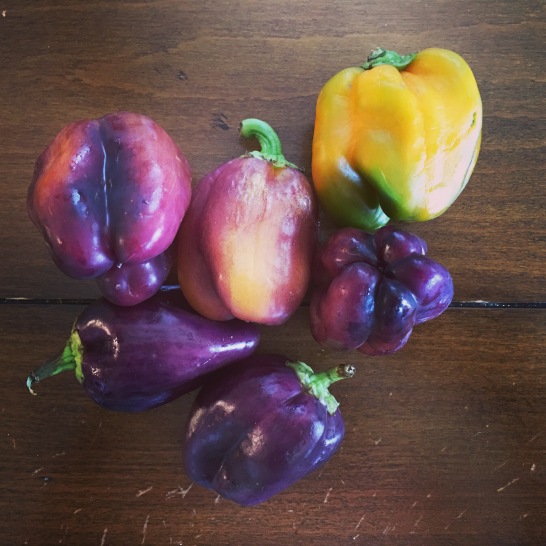 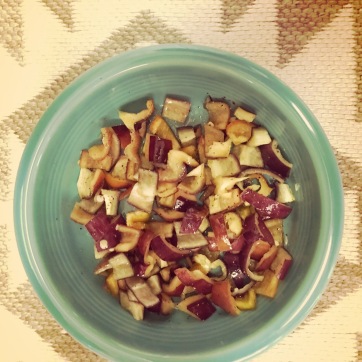 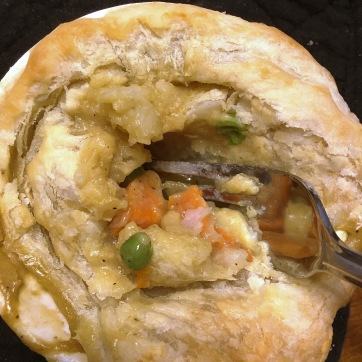