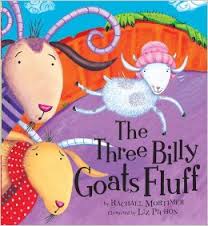 My little bookworm has fallen in love with The Three Billy Goats Fluff by Rachael Mortimer. We’ve been reading this colorfully illustrated tale of fluffy goats and a grumpy troll since she was a baby, but in recent weeks my love has taken over the telling of this story with gusto.

At any given time, she can be found acting out scenes between the goat siblings, who try to graze on the other side of the bridge, and the sleep deprived Troll who makes his home underneath said bridge. My sweet girl takes turns playing all characters, but I think she relishes the role of the Troll above all others.

During a break in the storms this past weekend, we sat outside to enjoy the only hour or two of sunshine we’d seen in a while, when I was commissioned to play the roles of the billy goats. She crouched down under my chair and made for quite the convincing troll. Then it was time to switch parts, and suddenly my legs became the bridge for her little goat hooves to trip trap their way across. I thought of it as a massage of sorts for my shin splints.

Although I haven’t been acting out any of the books that I’ve been reading lately, I’m as

equally enthusiastic about my literary finds as my little person is. I was lent the most precious novel; yes I’m using the word precious to describe The Rosie Project by Graeme Simsion. I would never have picked up this book on my own, but I am beyond thrilled that one of my dearest friends insisted that I read it. Don Tillman’s unconventional quest to find the perfect wife, while heroically struggling to fit in, humanizes the wants and desires that we all share in this heartwarming story. It just left me smiling.

The Rosie Project was the perfect, lighthearted  transition from The Omnivore’s Dilemma to Lawrence Wright’s Scientology expose, Going Clear. Ever since Scientology began building an enormous center next to our flat in Yaffo, Israel, I have

been curious about this cult-like group that defines themselves as a religion. As we were preparing to move from Yaffo to Ramat Gan, we actually sublet our flat to an elderly Scientologist couple, who had sold all of their belongings to move closer to the new Scientology building. Closer, as in right next door to the massive structure. They were pleasant, if not a bit quirky, but I couldn’t reconcile the idea that Scientology was taking root in the Islamic, Christian, and Jewish epicenter of the world. Going Clear has been an eye-opening read so far, begging the question of how people are drawn into extremism, where revisionism and abuse become the acceptable norm.

In between reading over this rainy, tornado filled, three-day weekend, we made mushroom naan pizzas, watched Peter Pan a zillion times, and dyed “Easter” eggs. I just hope my love sticks to trip trapping across bridges and doesn’t get it into her head to try and fly!

2 thoughts on “The Rosie Project, Going Clear, and The Three Billy Goats Fluff”