I love the way my daughter smells.  From the first moment she was in my arms, I have not been able to inhale enough of her.  I love her sweaty little feet, her morning breath, even her “fluffs!”  Sense of smell is a powerfully binding force between mothers and babies, but I know the days of pressing my nose against her neck at will for nice long whiffs of baby bliss are numbered.

Her vocabulary is already peppered with declarations of “No Mommy, I’ll do it,”  and she never fails to make her opinions clear.  It’s either “yummy good” or “yucky.”  I know that it’s only a matter of time before she innocently pushes me away when she’s not in the mood for yet another kiss, hug, or sniff, but until then, I plan on getting in as many as she’ll allow.

There have been a few instances though when I wished I couldn’t smell anything at all.  Trying to hide the fact that you’re gagging with a smile and stifled breath is no easy feat. Not all, but some of these odorous situations have revolved around food.

I will never forget the first time that my little foodie tried pureed salmon.  She was 7.5 months old. The spoon made contact with her tongue innocently enough. The foreign flavor settled in, she slowly squinted her little eyes, pursed her lips, and promptly spit it out.  We tried again, and after the second spoonful she gave me a confused “why are you doing this to me” look.  Yet by the fourth and fifth bites, she was a salmon eating pro, and finished the entire bowl.

The joy of success however is not my most vivid memory of her culinary foray into the seafood world.  It is the stench of success.  The smell of salmon puree, mingled with a hint of garlic, lingered on her until bath time.  When I say lingered, I mean it was as if she had been infused with that fishy scent.  And her burps were as equally delightful.  I remember thinking that a baby should never smell like that and thank God I had fed her salmon for dinner instead of lunch! 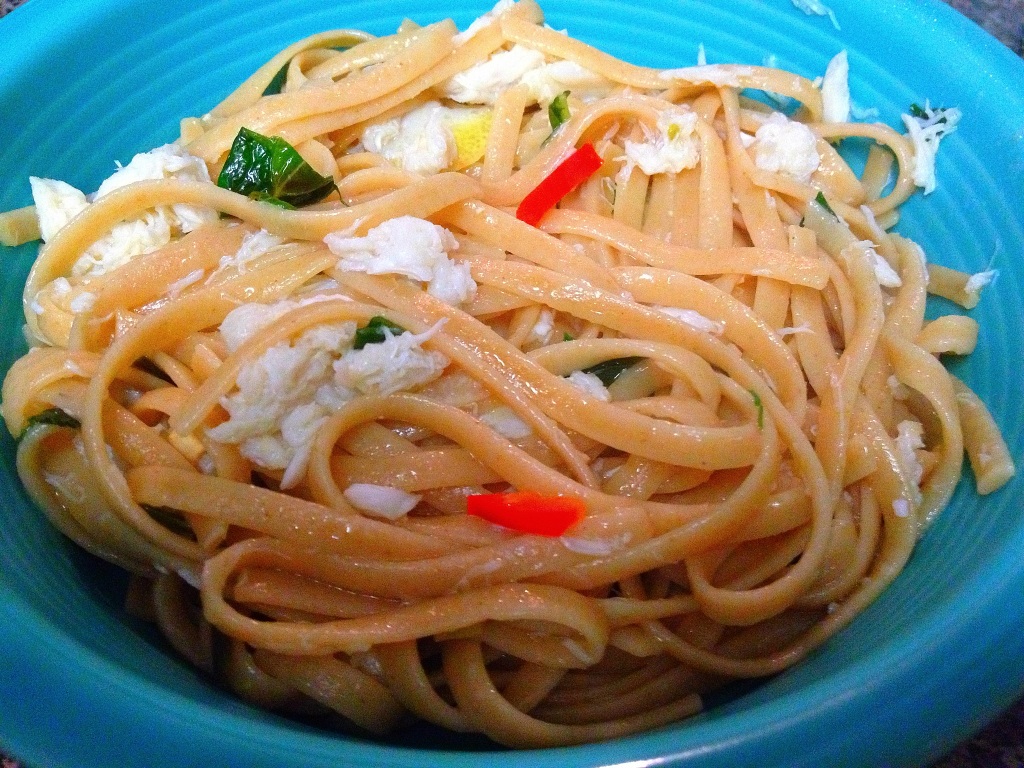 Fortunately, after another month I was able to give her bite-sized pieces of fish, rather than puree, and it  solved our smelly fish baby dilemma.  Nowadays, she loves various kinds of fish and shrimp, so it was no surprise that she loved her first taste of crab last night.

I made Linguine with Crab, Lemon, Chile and Mint, substituting Earth Balance Coconut Spread for butter and using whole grain linguine pasta.  While I cooked the chilies to infuse the sauce with their flavor, I served her portions with the actual chile pieces removed.

She enthusiastically exclaimed “yummy good” as she abandoned her fork in favor of using her two hands to deposit as much deliciousness into her mouth as possible.

Periodically, she cried for “More crab! More pasta!”  I thought there would be leftovers, but I was very wrong.

Her excitement was hilarious and contagious.  The best part though, was that the creamy sweet aroma of the crab made our after dinner cuddling and play time scent-fully wonderful.